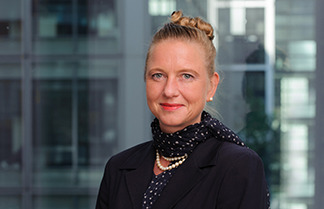 As the Vice President and Chief Administration Officer of EBRD, Luise Hölscher was responsible for Human Resources and Corporate Services which includes Information Technology (IT), Administrative Services Department (ASD) and Corporate Procurement Unit (CPU). She was also a member of the Bank’s Executive Committee, Management Committee and other Management committees.

Ms. Hölscher joined the EBRD on 1 October 2013 from the Ministry of Finance in the German Federal State of Hesse, where she was State Secretary. As State Secretary, she led the administration of the Finance Ministry in Hesse, with responsibilities including human resources management, real estate and facility management and oversight of IT, documentation and procurement with more than 15,000 employees.

Ms. Hölscher was named as one of the 44 most influential Germans in institutions worldwide by the German journal Politik & Kommunikation in 2016. The journal focuses on politics and communication and highlights Ms. Hölscher‘s engagement in supporting women in leading positions.

Before joining the Ministry, Ms. Hölscher was also the Commissioner of the German Federal Assembly and held the Chair of Accounting and Taxation at the Frankfurt School of Finance and Management. Ms. Hölscher has a wide range of experience within politics, academia, legal and accounting firms.

Ms. Hölscher studied business administration at the University of Osnabruck and holds a Ph.D. from the Friedrich-Alexander University Erlangen-Nuremberg.