The European Bank for Reconstruction and Development seeks to foster the transition to an open market-oriented economy and to promote private and entrepreneurial initiative in more than 30 countries from Morocco to Mongolia and Egypt to Estonia.

To perform this task effectively, we need to analyse and understand how transition has affected the lives of people in regions, and what their views are on issues such as democracy, the role of the state, and prospects for the future.

The EBRD, in collaboration with the World Bank, has carried out three such surveys: one in 2006, one in 2010 and one in 2016. The most recent polled 51,000 households in 34 countries, mainly “transition countries” in central and eastern Europe as well as Turkey and also, for the sake of comparison with more prosperous western neighbours, from Germany and Italy. For the first time, the survey also covered Cyprus and Greece.

Three publications have been produced which summarise some of the main results of the survey and to share these results with our partners.

Life in Transition Survey III: A decade of measuring transition

The Life in Transition Survey III showed growing levels of life satisfaction across the former communist bloc, generally decreasing but continuing concerns about corruption and a persistent gender divide in the labour markets and in business.

Life in Transition Survey II: After the crisis

The Life in Transition Survey II, conducted jointly by the EBRD and the World Bank in late 2010, surveyed almost 39,000 households in 34 countries, mainly in the former communist east, the region of the world that suffered most severely from the crisis.

DTA format (200MB - DTA) which can be opened in Stata.
A version in CSV format will be available in due course.
Questionnaire (161KB - PDF)
Charts for individual countries can be found on the assessment pages listed on the publication page.
Technical Report (4MB - PDF)

Life in Transition Survey I: A survey of people’s experiences and attitudes

The Life in Transition Survey I, conducted jointly by the EBRD and the World Bank in 2006, surveyed almost 29,000 individuals across 29 countries to assess public attitudes, well-being and the impact of economic and political change. This publication summarises some of the main results of this survey. 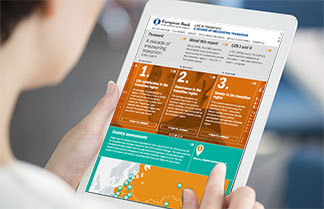