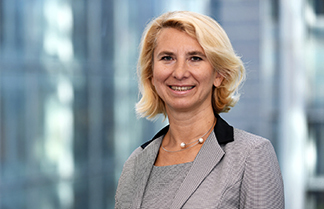 As the EBRD’s Chief Economist, Beata Javorcik is responsible for advising the President and other senior members of the Bank’s management team on economic issues of strategic or operational relevance to the EBRD regions.

The Chief Economist provides thought leadership inside and outside of the EBRD on economic issues related to the Bank’s work in the countries where it works. The Office of the Chief Economist undertakes and presents its own research, representing the Bank at high-level external policy and academic conferences and workshops, publishes in academic and non-academic outlets, and maintains strong links between the EBRD and academia.

The Chief Economist ensures that the economics research agenda of the EBRD continues to put the Bank at the forefront of understanding the economic and strategic challenges facing the Bank’s regions and to help the Bank formulate effective policy responses.

Before taking up her position at Oxford University, she worked at the World Bank in Washington DC, where she focussed on research, lending operations and policy advice.

Dr Javorcik specializes in international trade. Her research interests focus on determinants and consequences of inflows of foreign direct investment, implications of services liberalisation, evaluation of investment promotion programmes, propagation of shock through production networks and evasion of import duties. Her research has been published in the American Economic Review, Journal of the European Economic Association, Review of Economics and Statistics, European Economic Review, Economic Journal, Journal of International Economics and Journal of Development Economics.

"Good for the Environment, Good for Business: Foreign Acquisitions and Energy Intensity" with A. Brucal and I. Love, Journal of International Economics, forthcoming

"Climbing the Rungs of the Quality Ladder: FDI and Domestic Exporters in Romania" with M. Bajgar
Economic Journal, conditionally accepted

"Don't Throw in the Towel, Throw in Trade Credit!" with B. Demir, Journal of International Economics, 2018

"Working across Time Zones: Exporters and the Gender Wage Gap" with E.A. Boler and K.H. Ulltveit-Moe, Journal of International Economics, 2018

"New and Improved: Does FDI Boost Production Complexity in Host Countries?" with A. Lo Turco and D. Maggioni, Economic Journal, 2018

"Former Foreign Affiliates: Cast Out and Outperformed?" with S. Poelhekke, Journal of the European Economic Association, 2017

"Accession to the World Trade Organization and Tariff Evasion" with G. Narciso, Journal of Development Economics, 2017

"Multi-Product Firms at Home and Away: Cost- versus Quality-Based Competence" with C. Eckel, L. Iacovone and P. Neary, Journal of International Economics, 2015

"Do the Biggest Aisles Serve a Brighter Future? Global Retail Chains and Their Implications for Romania" with Y. Li, Journal of International Economics, 2013

"FDI and Export Upgrading" with T. Harding, Review of Economics and Statistics, 2012

"Does Services Liberalization Benefit Manufacturing Firms? Evidence from the Czech Republic" with J. Arnold and A. Mattoo, Journal of International Economics, 2011

"Roll out the Red Carpet and They Will Come: Investment Promotion and FDI Inflows" with T. Harding
Economic Journal, 2011

"Does It Matter Where You Come From? Vertical Spillovers from Foreign Direct Investment and the Origin of Investors" with M. Spatareanu, Journal of Development Economics, 2011

"Tough Love: Do Czech Suppliers Learn from Their Relationships with Multinationals?" with M. Spatareanu
Scandinavian Journal of Economics, Special issue on Heterogeneous firms and trade, 2009

"Trade Costs and Location of Foreign Firms in China" with M. Amiti, Journal of Development Economics, 2008

"To Share or Not to Share: Does Local Participation Matter for Spillovers from FDI?" with M. Spatareanu,
Journal of Development Economics, 2008

"Does Foreign Direct Investment Increase the Productivity of Domestic Firms? In Search of Spillovers through Backward Linkages", American Economic Review, 2004