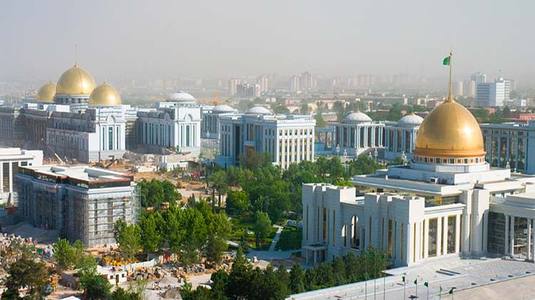 EBRD President Sir Suma Chakrabarti visited Turkmenistan on 23 May 2016, as part of a trip to three Caspian states – Turkmenistan, Azerbaijan and Kazakhstan.

During the one-day visit – which was his first visit to the country and the first visit by an EBRD President to Turkmenistan since 2008 – President Chakrabarti met the President of Turkmenistan, Gurbanguly Berdimuhamedov. He also met a number of deputy prime ministers, and officials from the National Bank of Turkmenistan. In addition, Sir Suma visited a private sector enterprise which is an EBRD client.

The EBRD President and the President of Turkmenistan had a lengthy discussion on a number of issues, in particular the need to continue strengthening the non-oil and gas private sector as oil prices remained low. The key topic was an increase in cooperation and investment, in parallel with the further intensification of market reforms. The two presidents discussed the need to provide local currency lending to private sector small and medium-sized enterprises to reduce their foreign exchange risk. They discussed the EBRD’s willingness to finance public utilities in Turkmenistan and to support reforms that are under way in the sector, with help from an international consultant engaged by the EBRD who has identified priority areas. Sir Suma stressed that the EBRD is interested in supporting Turkmenistan’s efforts under the Global Gas Flaring Reduction Initiative to reduce petroleum gas flaring which is one of the major ways to cut greenhouse gas emissions. They also discussed the security and energy situation in the region.

President Chakrabarti discussed with President Berdimuhamedov Turkmenistan’s status of permanent neutrality and progress in Turkmenistan’s human rights dialogue under the National Action Plan developed with the support of the United Nations Development Programme for the period 2016-20 and in dialogue with the European Union and the United Nations. They also noted the increase in female representation in parliament, where currently 26 per cent of MPs are women.

President Berdimuhamedov invited the EBRD to participate in a UN conference on transport and transit corridors in Turkmenistan in November.

During the visit, President Chakrabarti signed a Memorandum of Understanding between the EBRD and the Union of Industrialists and Entrepreneurs of Turkmenistan which calls for increased cooperation to support the private sector.

The EBRD President and the delegation also visited Ak Gap, a privately owned company on the outskirts of Ashgabat, which produces polyethylene terephthalate (PET) preforms and plastic caps used for the bottling of soft drinks by other private sector companies in the country, many of which are also EBRD clients. The EBRD has cooperated with Ak Gap by providing financing and consultancy services through its agribusiness advisory team.

Summing up the visit, Sir Suma said: “It was my first visit to Turkmenistan. I was very pleased to have very productive meetings with President Gurbanguly Berdimuhamedov and key government officials, I am encouraged by the recent market-oriented steps and the current focus on private business development, and I am confident we will increase our cooperation and our support to Turkmenistan in the near future.”

To date, the EBRD has invested €230 million in 53 projects in Turkmenistan.