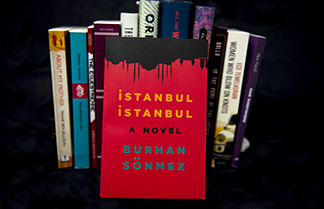 Rosie Goldsmith, EBRD Literature Prize judge: “Such writing, insight and humour, it is as if “The Decameron” were transferred to an Istanbul prison. A group of prisoners, all who’ve been tortured, huddled together in appalling conditions, relate ten stories in ten chapters over ten days. Translated by Ümit Hussein, this is not a political novel but a universal novel about humanity: about pain and cruelty, love and kindness, death and survival.”

Born in Central Anatolia in 1965, Burhan Sonmez grew up speaking Turkish and Kurdish. He worked as a lawyer in Istanbul, and was a founder of the social-activist cultural organisation TAKSAV (Foundation for Social Research, Culture and Art). He also wrote on literature, culture and politics for various newspapers and magazines. Burhan was seriously injured following an assault by Turkish police and lived in exile for some years. He now lectures at the METU University in Ankara. The recipient of a number of literary prizes, his novels have been published in over twenty countries. www.burhansonmez.com

Ümit Hussein is a translator and interpreter of Turkish Cypriot origin who was born and raised in London. She has translated authors such as Nevin Halici, Mehmet Yashin and Ahmet Altan into English.