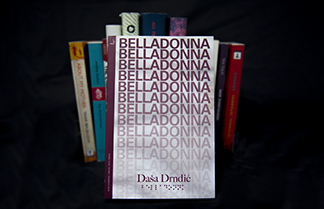 Peter Frankopan, EBRD Literature Prize judge: “A disturbing and moving account of the blending of memories, dashed hopes and sadness as a man struggles to make sense of his life – and the world changing around him. Drndić captures the pain and tragedy of love and loss, with the author’s lyricism matched by that of the translation by Celia Hawkesworth.”

Dasa Dmdic (born in 1946) is a distinguished Croatian novelist and playwright. She is the author of the critically acclaimed “Trieste”, which was shortlisted for the Independent Foreign Fiction Prize (now the Man Booker International) in 2013. Only in her sixties did her books become recognised outside the Balkan countries, and she is now translated into French, German, Italian, Dutch and English. “Belladonna” is also published in the US by New Directions (October 2017).

Celia Hawkesworth is a translator and researcher of Serbian, Croatian and Bosnian literatures. For many years she was a senior lecturer in Serbian and Croatian in the University College, London. She is a winner of the Heldt Prize for Translation in 1999.  One of her own books is “Zagreb: A Cultural History” (Oxford University Press, 2007).