The European Bank for Reconstruction and Development (EBRD), the European Investment Bank (EIB), and the World Bank have published a joint report, Unlocking Sustainable Private-Sector Growth in the Middle East and North Africa (MENA). The report analyses constraints on productivity growth and limited accumulation of factors or production in the MENA private sector.

The report is based on the MENA Enterprise Survey conducted between late 2018 and 2020 on over 5,800 formal businesses across Egypt, Jordan, Lebanon, Morocco, Tunisia, the West Bank and Gaza.

Historically, economic growth in the Middle East and North Africa has been weak since the global financial crisis of 2007-09 and the Arab Spring of the early 2010s. Since then, gross domestic product (GDP) per capita has grown by only 0.3 per cent a year in the MENA region. That compares unfavourably with rates of 1.7 per cent on average in middle-income countries and 2.4 per cent in the developing economies of Europe and Central Asia. 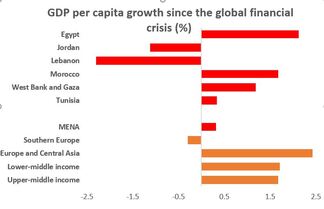 Achieving higher and sustainable growth is particularly important in view of other economic challenges facing the region. Public debt has increased considerably over the last decade, accompanied by declining investment. More recently, the coronavirus pandemic has battered the region, further straining public finances. In addition, the Russian invasion of Ukraine affects the MENA economies through higher hydrocarbon prices, risks to food security and declining tourism.

Against this background, it is important that policymakers exploit the potential of the private sector to propel the region towards greater prosperity.

The business environment in the MENA region as reported in the survey has been held back by various factors. Political connection and informality are undermining fair competition, bringing economic benefits to a limited number of companies. Management practices lag behind benchmark countries, with a decline in average scores in all MENA countries since 2013.

Although firms trading in the international market are more willing to develop and innovate processes, only 20 per cent invest in innovation, which can affect the long-term economic prospects for the region.

The region needs to make better use of its human capital. Predominantly, only a few foreign-owned companies invest in training their human capital, and they tend to be digitally connected exporting firms. In addition, a significant share of companies are not engaging in financial activities with other economic players, opting to self-finance voluntarily.

Incentives for companies to decarbonise are weak, and MENA firms are less likely than their counterparts in Europe and Central Asia to adopt measures that reduce their environmental footprint.

The region is also in need of reforms to facilitate innovation, the adoption of digital technologies and investments in human capital, while being in line with the global agenda to limit climate change, enhance sustainability and protect the natural environment.

Companies should also be given incentives to exploit the benefits of participating in cross-border trade and global value chains more broadly, accompanied by better management practices.

At the same time, the state has a duty to ensure that this transition process is just, through measures that help workers to take advantage of opportunities to obtain new, higher-quality jobs linked to the green economy, while also protecting those at risk of losing their jobs. Such measures include labour market policies, skills training, social safety nets and action to support regional economic development.

EBRD Chief Economist Beata Javorcik said: “Climate change creates an opportunity for the MENA region to build up its green credentials and use them as a source of competitive advantage. This will create the much-needed high-quality jobs linked to the green economy.”