Aradei Capital is a type of real estate investment trust (REIT) platform stemming from a real estate spin-off of Label’Vie Group (LBV), the exclusive Carrefour franchisee in Morocco and the second largest food retailer in the country . It was formerly known as Vecteur LV.

Back in early 2016 the EBRD invested €45 million in newly issued shares of Vecteur LV. At that time, Vecteur LV was a growing company with limited property portfolio diversification and a captive shareholder base. It gradually increased the share of assets in its portfolio that were being developed/leased to other tenants, including offices, industrial buildings, bank retail branches and other commercial real estate. This was in addition to food retail property assets tenanted by LBV.

The shareholders’ vision was to transform Aradei into a leading commercial real estate company in Morocco and deliver a stable return and capital appreciation from a diversified portfolio of real estate assets.

And this vision has been realised. Today, Aradei holds a diversified portfolio of 30 commercial real estate assets with a gross leasable area (GLA) of 380,000 square metres across 22 cities in Morocco. The assets include shopping malls, multi-tenanted retail parks anchored by supermarkets and hypermarkets, an industrial facility, greenfield land plots of 190,000 square metres earmarked for future mixed-use developments, alongside 103 bank branches acquired in a lease-back transaction with BMCI (BNP Paribas in Morocco).

Seizing the opportunity for growth

The retail sector represents a significant part of the Moroccan economy, contributing 8 per cent to the country’s GDP and providing 1.6 million jobs. However, modern facilities account for less than 20 per cent of the total retail market.

Over the medium term, higher GDP per capita and favourable social trends, such as urbanisation and a growing middle class, mean that spending in sectors such as food and non-food retail will rise, with consumers gradually opting for better-quality products. This is expected to spur the demand for modern retail facilities.

The growth in other property segments (such as offices, logistics and so on) is also closely linked to GDP growth whereas the penetration rate for such assets in Morocco is much lower than international benchmarks.

Creating value at the pre-investment stage

IThrough policy dialogue, the EBRD helped the Moroccan authorities develop a regulatory framework for OPCI/REITs as a new asset class to deepen capital market liquidity. An OPCI – Organisme de Placements Collectifs Immobiliers – is the Moroccan equivalent of a REIT.

Technical cooperation  was provided to the company to: (i) improve its sustainability strategy by refining materiality of sustainability issues  and developing an action plan with E&S  commitments; and (ii) develop a formal environmental sustainability and climate change management framework including performance targets, data management and benchmarking systems, and implementation plans.

Aradei achieved the critical size and profitability required to strengthen and diversify its shareholder base at pre-IPO stage to include large foreign and local institutional investors. As a precondition, this required setting up a REIT-type corporate governance structure, including an independent asset management team to maximise value for all shareholders.

Aradei’s IPO in December 2020 marked a milestone in the company’s history. The fundraising operation (600 million dirhams) helped support its growth. The IPO was popular, being oversubscribed 4.3 times.

In 2020 the EBRD secured two partial exits generating attractive returns. The first was at pre-IPO in May, when the EBRD sold a stake of €20 million to GEPF, the largest South African pension fund managed by PIC (Public Investment Corporation). The second was in December when the Bank sold a stake of €13 million at the IPO on the Casablanca Stock Exchange.

By investing in an innovative financing structure, and so acting as a model for other investments, the EBRD contributed to the development of a legal and regulatory framework for the introduction of OPCI/REITs, thus deepening the capital market liquidity. The Bank’s equity investment helped to further develop the local real estate market through the expansion of modern, sustainable and energy-efficient commercial real estate infrastructure, strengthening the country’s growth and creating new jobs.

Sustainability measures implemented across the portfolio significantly enhanced its value, and the EBRD’s involvement as an early anchor investor supported the institutionalisation of Aradei  and enabled it to upgrade its corporate governance towards best international standards. These changes increased Aradei’s marketability and ability to attract financing from local capital markets, through bonds, an IPO and international investors.

The EBRD’s involvement provided institutional credibility and enhanced the probability of a successful IPO of the company as the first sizeable REIT-like platform on the Casablanca Stock Exchange.

Contact the EBRD Equity team to find out more 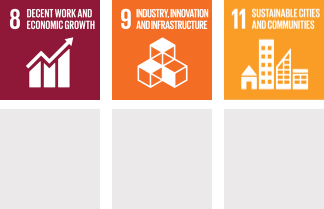