The EBRD's Board of Governors elected Sir Suma Chakrabarti to serve as the Bank's President for a four year term on 18 May 2012, during the EBRD’s 21st Annual Meeting in London.

The Governors represented the EBRD’s then 65 shareholders.

The outcome of the election was decided by secret ballot.

To be elected, a candidate for President had to receive the votes of a majority of Governors, who should represent not less than a majority of the total voting power of members. A double majority was therefore required:

(i) a majority of the votes of the Governors for each member of the Bank (with 65 members this would mean the support of at least 33 Governors); and

There were five candidates for the role:

The sixth President of the EBRD since the Bank’s founding in 1991, Sir Suma was the first British national to be elected to the position.

He succeeded Mr Mirow who served as President from July 2008 to July 2012.

The previous Presidents were: 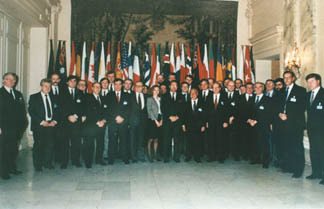