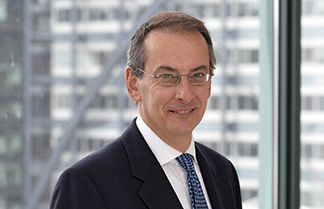 Matteo Patrone is the Managing Director, Eastern Europe and the Caucasus (EEC) at the European Bank for Reconstruction and Development (EBRD).

Matteo is responsible for the Bank’s operations and policy engagement initiatives in Armenia, Azerbaijan, Belarus*, Georgia, Moldova and Ukraine.

Prior to Russia’s invasion of Ukraine, he was based in Kyiv, together with a team of over 100 staff. Since the start of the war, the EBRD’s Ukraine team has relocated to Poland, and is now based in Warsaw.

EBRD invests about €2 billion a year in the region in more than 75 new transactions. Following the war on Ukraine, this number increased significantly as the Bank stepped up its support to Ukraine.

The Bank holds a portfolio of over €8.5 billion in EEC.

Matteo has over 25 years’ experience in industry and finance. He joined the EBRD in 2008, in the Corporate Equity team where he was supervising equity transactions with a focus on Western Balkans, Poland, Turkey and Russian Federation. In 2012 he was appointed Country Director for Serbia and in 2015 Regional Director for Romania and Bulgaria. In these countries the Bank invested more than EUR 3bn and conducted a number of substantial policy engagement initiatives under his leadership, including an Investment Climate and Governance Initiative in Serbia, and fostering the development of local capital markets and reforming the water sector in Romania and Bulgaria.

He has also held various Supervisory Board and Board of Directors memberships in investee companies and private equity funds and also served as a Director on the Foreign Investment Council in Romania.

Prior to working at the EBRD, Matteo was Managing Director at Finint & Partners, the private equity arm of Finanziaria Internazionale, an Italian merchant bank, where he spent 10 years investing in a broad range of sectors.

Before that he was Senior Manager at Accenture Strategic Services in Milan, Italy and held various positions in the Finmeccanica and ENI groups in the UK and Italy.

Matteo was born in Genoa, Italy, and lived in Buenos Aires, Argentina.

* N.B. The Bank suspended Russia and Belarus’s access to the EBRD’s finance and expertise ‘open-endedly’ in April 2022. This means that there can be no new financing of projects or technical cooperation activities in either country. Furthermore, the Bank avails itself of all rights to suspend or cancel further disbursements of funding on existing projects.