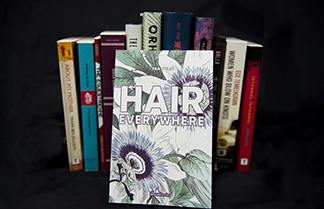 Lucy Hannah, EBRD Literature Prize judge: “Unusual, compelling and funny, this first person narrative is the delicate and painful story of a young girl coming to terms with her mother’s battle with cancer. The novel is written in short, almost poetic vignettes, which retain their poignancy in the sensitive translation by Coral Petkovich.”

Tea Tulić is a Croatian writer. In 2011, she won Prozak, a literary award for the best manuscript from a young author, which resulted in publication of her first book, a fragmentary novel Kosa posvuda (Hair Everywhere). The novel received numerous positive reviews and short-listed for the Jutarnji List Award. The Croatian Ministry of Culture awarded it as one of the best prose books in 2011. Hair Everywhere has been translated into Italian, Macedonian and Serbian. 2014. In cooperation with musical collective Japanski Premijeri, Tea published a spoken word album Albumče on the Bandcamp site. She is a jury member of international short prose competition Lapis Histrae and a member of RiLit, a non-formal group of writers from Rijeka. Her work has been published in various literary and cultural magazines in the region and beyond.

Coral Petkovich was born in Perth, Western Australia to third generation Australians of English/Scottish heritage. She met her future husband in Sydney and lived with him in Croatia, where she learnt the Croatian language. Her own book 'Ivan - From the Adriatic to the Pacific' is a family saga based on her husband's true story. She has worked as an interpreter for the Department of Immigration and Citizenship, and a translator from Croatian to English. Her first translation of a full-length work of fiction, Seven Terrors by Selvedin Avdic, was also published by Istros Books in London.