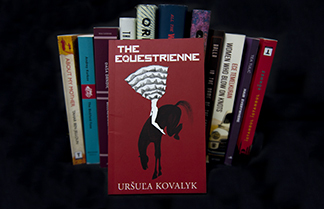 Gabriel Gbadamosi, EBRD Literature Prize judge: “Uršul'a Kovalyk's novel is a rainbow of images and insights that guides a young girl to a world after communism. The rainbow is broken; it broke my heart. Julia and Peter Sherwood's flawless translation gives pace and fluidity to a read spiked with moments of astonishing audacity.

Uršuľa Kovalyk is a poet, fiction writer, playwright and social worker. She was born in 1969 in Košice, eastern Slovakia, and currently lives in the capital, Bratislava. She has worked for a women's non-profit focusing on women's rights and currently works for the NGO Against the Current, which helps homeless people. She is the director of the Theatre With No Home, which features homeless and disabled actors. She has published plays, short stories and novels, and was shortlisted for the Anasoft Litera 2014, an award for best Slovak fiction, for Krasojazdkyña (The Equestrienne).