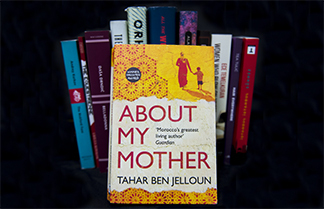 Gabriel Gbadamosi, EBRD Literature Prize judge: “A tale of a mother's encroaching dementia and family conflict. Tahar Ben Jelloun explores what it means to be Moroccan, and whether contemporary Moroccan culture can still cope with dementia in old age.   Ros Schwartz and Lulu Norman translate a thoughtful homage from a son to a mother.”

Born in Fez, Morocco, Tahar Ben Jelloun is an award-winning and internationally bestselling novelist, essayist, critic and poet. Regularly shortlisted for the Nobel Prize in Literature, he has won the Prix Goncourt and the International IMPAC Dublin Literary Award. His work has also been shortlisted for the Independent Foreign Fiction Prize. He received the rank of Officier de la Légion d’honneur in 2008. Some of his works in English translation include The Happy Marriage, This Blinding Absence of Light, The Sand Child and Racism Explained to My Daughter.

Ros Schwartz has translated a wide range of Francophone fiction and non-fiction writers including Andrée Chedid, Aziz Chouaki, Fatou Diome, Dominique Manotti and Dominique Eddé. She was made Chevalier dans l’Ordre des Arts et des Lettres for her services to literature in 2009.

Lulu Norman has translated the work of Mahi Binebine, Albert Cossery, Mahmoud Darwish, Amin Maalouf and the songs of Serge Gainsbourg. Her translations have been shortlisted for the International IMPAC Dublin Literary Award, Independent Foreign Fiction Prize and Best Translated Books Award, among others.