Bilateral donors include individual governments – among them, some EBRD countries of operations – and their development agencies. Our donors include:

Solar and wind projects in Jordan and Egypt have reduced energy costs and dependence on hydrocarbons.

The EBRD also works with several multilateral donors, including:

Alongside donor funds from bilateral and multilateral donors, the EBRD’s shareholders also provide grant funding from the EBRD net income in areas of strategic importance.

The Climate Investment Funds are financing instruments channelled through multilateral development banks and designed to pilot low-carbon emissions and climate-resilient development. They include the Clean Technology Fund for climate mitigation in middle-income countries and the Strategic Climate Fund for building climate resilience, investments in forestry and renewable energy investments in low-income countries. The EBRD has been a partner to the Climate Investment Funds since 2007 implementing sustainable energy solutions, such as district heating, energy efficiency, renewables, waste processing, as well as climate resilience measures.

The European Union (EU), an EBRD shareholder, is the largest donor to the EBRD, and has been contributing more than one-third of its total grants since the Bank’s inception. EU grants are utilised across most of the EBRD countries of operations, and their use has been growing. The majority of EU funds managed by the EBRD are accessed through regional blending facilities, such as the Neighborhood Investment Facility, the Investment Facility for Central Asia, the Asia Investment Facility, and the Instrument for Pre-Accession Assistance (IPA).

Recognising the scale of investment necessary to limit global temperature rise to below 2 degrees Celsius, the Green Climate Fund was created to support developing countries in mitigating and adapting to the challenges posed by climate change. The EBRD and the GCF have been working together since 2017 to respond rapidly and effectively to these challenges for the benefit of millions of people. Together, the GCF and the EBRD are unlocking the necessary financial and technical forces to support green, transformational investments in developing countries. Blended GCF and EBRD resources currently flow into climate change mitigation and adaptation projects across 14 countries.

Middle income countries currently host roughly six million refugees, yet they struggle to access finance at concessional interest rates, making it difficult to afford the costs associated with an influx of refugees. The Concessional Financing Facility aims to close the financing gap by providing a source of long term concessional financing for those countries.  The EBRD is one of the implementing partners investment projects, supported with funds from the Fund, which benefit the refugees and their hosting communities.

The Global Environment Facility was established in 1991 as one of the few international funds channelling public resources to address climate change and environmental degradation. As one of its implementing partners, the EBRD has been receiving grant co-financing, grants for technical assistance and concessional finance for projects in the field of international waters, chemicals and waste, and climate change mitigation and adaptation.

The Global Road Safety Facility (GRSF) is a global multi-donor fund hosted by the World Bank. Its mission is to help governments develop road safety management capacity and scale up road safety delivery in low- and middle-income countries. The EBRD has been cooperating with the GRSF since 2018.

The Middle East and North Africa Transition Fund, set up under the Deauville Partnership, is a broad-based partnership providing technical cooperation grants. These grants help transition economies in the region strengthen their governance as well as their social and economic institutions by developing and implementing reforms. The EBRD is one of the implementing partners assisting beneficiary governments in implementing the needed reform programmes.

The Special Climate Change Fund is a trust fund, managed within the Global Environment Facility focusing on climate change adaptation, covering areas such as water efficiency, water management, and climate-smart agriculture. As an implementing partner of the Fund, the EBRD is currently carrying out, amongst others, climate resilience projects in Tajikistan, the Kyrgyz Republic, and Morocco.

The Women Entrepreneurs Finance Initiative (We-Fi) is the first multilateral fund specifically designed to unleash the potential of women entrepreneurs in emerging economies. We-Fi funds projects that work across the entire entrepreneurial ecosystem, including blended finance investments, capacity building for institutions and women entrepreneurs, and policy reforms to increase women’s access to finance, markets, and networks. The EBRD has been an implementing partner of the Initiative since the We-Fi’s launch in 2017. 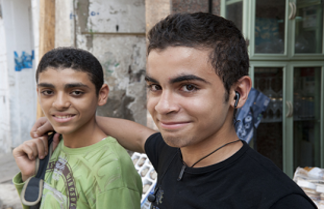 Launch “From crisis to opportunity”

This is the story, told in video, pictures and text, of the smart thinking in Jordan that supports the 1.3 million Syrian refugees who have found shelter there and of some of the lives it has changed.