The European Bank for Reconstruction and Development (EBRD) was established to help build a new, post-Cold War era in Central and Eastern Europe. It has since played a historic role and gained unique expertise in fostering change in the region - and beyond - investing €170 billion in more than 6,400 projects.

Urgency and the ability to respond to momentous events swiftly and decisively, whether it be the end of the Soviet Union, financial crises, the ‘Arab Uprising,' the coronavirus pandemic or the war on Ukraine have been among the EBRD’s hallmarks from the start.

It is currently active in more than 35 countries from central Europe to central Asia and the southern and eastern Mediterranean, plus the West Bank and Gaza.

Part of our response to that crisis was a substantial and rapid increase in the volume of our operations. That increase continued throughout the second decade of the century, despite a new operational approach to Russia, previously the EBRD’s largest country by business volume, under which, following guidance from a majority of our Directors, the Bank no longer undertook new business there. In 2022, soon after Russia's invasion of Ukraine, the Bank's Governors voted to suspend Russia's and Belarus's access to Bank resources.

The EBRD serves the interests of all its shareholders - 71 countries from five continents plus the European Union and the European Investment Bank - not just those countries which receive its investments (a record €13.1 billion in 2022). At the same time, the number of EBRD shareholders is still increasing; recent new members include China, India, San Marino, Libya, United Arab Emirates and Algeria. Indeed, the EBRD is one of only two major multilateral development banks currently expanding its shareholder base.

However many shareholders the EBRD has, we all stand to gain from the EBRD regions' closer and deeper integration into the global economy and their economies’ continued progress on their transition journeys. Today, based in its new headquarters in London's Canary Wharf, the Bank is doing more than ever before - across three continents - to help them on their way. 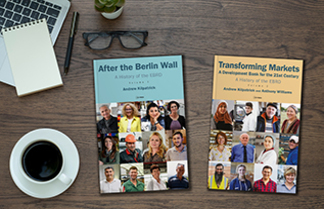